What is at the crux of this film, is a culmination of a variety of different films that deal 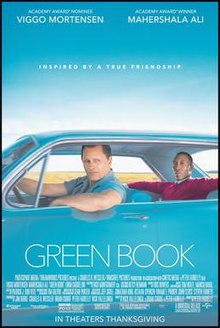 with the civil rights movement, the generic conventions of the buddy movie and grappling with a specific social context. Subverting the gender and race dimensions of Driving Miss Daisy (Bruce Beresford, 1989), this film follows New York bouncer Frank “Tony Lip” Vallelonga (Viggo Mortensen) who, searching for new employment gets invited to interview for the role of driver for Doc Don Shirley (Mahershala Ali). After deliberations, and, an interesting first encounter, Tony gets the job and must drive Doc across the deep south on his tour.

This film marks a significant departure for Farrelly, whose fare usually includes gross out comedy such as the likes of There’s Something About Mary (1998) and Shallow Hal (2001). There are, of course, some clear comedic moments and most of these form the basis of the relationship between the two men. However, as the narrative delves deeper into the personal troubles of both men and also the social context of the Jim Crow Laws in 1960’s America, this is where the films strengths are.

Now, let’s not get it twisted. Green Book is not a film to reinvent the wheel in terms of these types of films and there are definite classical Hollywood traits here. However, the performances of both Ali and Mortensen elevate the screenplay and inject such passion into their roles that makes this film an Oscar contender.

In sum, Green Book has all of the qualities of The Help, Hidden Figures, Driving Miss Daisy and many others that aid in its likeability. However, what sets this a part is its timeliness in regards to current race relations in the US as well as the charismatic performances of both of the male leads.